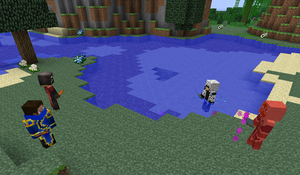 In Ars Magica, both Dark Mages and Light Mages will appear in the world.

Dark Mages can be identified by their skins and their spell books. They will engage in battle with you and light mages on the map.

Skins are randomized from a set of dark mage skins, so it is possible to identify them soley by skin.

The spell book's color indicates the power of the dark mage. Orange is the weakest. They can be engaged freely but can be dangerous in numbers. A red spell book indicates that the dark mage is an Adept. One on one they can be engaged with armor that has magic protection, but its best to have backup either in the form of a friend or summoned creature.

If a dark mage has a black spell book, they are a master. Run and pray they do not see you.

Light Mages can be identified by a blue book. They will engage with Dark Mages, skeletons, zombies and other mobs. If you are at less than 50% health, they will attempt to heal you.

Skins are randomized from a set of light mage skins, so it is possible to identify them soley by skin.

The spell book's color indicates the power of the light mage. Light blue is the weakest. They will offer some basic assistance with combat, but won't really win it for you. A deep blue spell book indicates that the light mage is an Adept. It's good to stick with these guys as their damage and healing is quite a bit higher.

If a light mage has a white spell book, they are a master. Just sit back and watch the show if anything hostile gets close.