Hecates are ghostly creatures that spawn in dark places or at night. They can also be spawned by the Hood of Debugging. They are the risen spirits of villagers. They are undead and burn in the sun.

Hecate are spectral assassins who thrive in the shadows. They are a type of flying mob. The Hecate emits smoke-like particles from it's waist into the ground. When they aren't moving, they float in the air with their back straight. When they are moving, they fly in superman-style. This means arms forward and legs back. In this case, smoke from the back. On the right you can see how they fly. 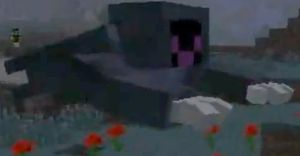 Hecate will fly around their immediate area until spotting a player, a villager, or an Iron Golem.

Upon seeing the enemy, Hecate will fly at very high speeds and attack, doing significant damage.

Hecate will also attempt to break down doors. When killed they have a small chance to drop Ender Essence.

When attacking or being attacked, the Hecate will become invisible.